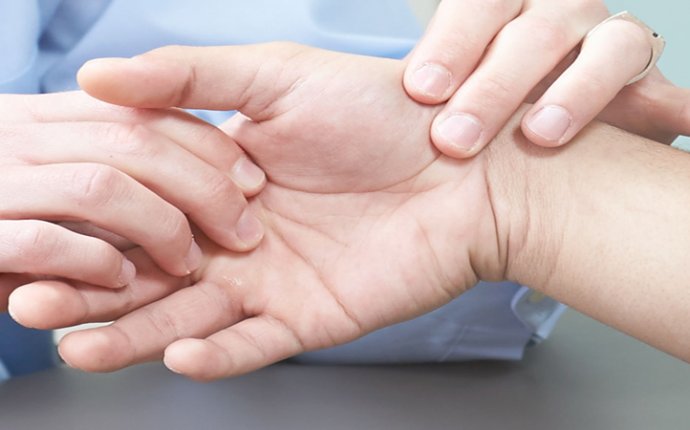 Barbara Elmore's painting Chards is one of the artworks sponsored by the Awakenings Project, an Illinois group that sponsors art, writing and music made by people with mental illness.

People with severe mental illness were once housed by the hundreds of thousands in state mental hospitals. But the "deinstitutionalization" movement that began in the 1960s and gained steam in the '70s and '80s changed the landscape - and the challenges that mentally ill people face.

It did not, however, mean the end to institutionalization. "What we have now is trans-institutionalization, " says Andrew Sperling, legislative director for the National Alliance for the Mentally Ill. People with mental illness leave acute or chronic care facilities without adequate provisions for their housing or support, and end up sliding into homeless shelters or the criminal justice system, Sperling says.

But in 1998, 283, 800 people with mental illnesses were incarcerated in American jails or prisons - four times the number in state mental hospitals, according to the Department of Justice. "These days, the largest single provider of housing for people with severe mental illness is the criminal justice system, " says Sperling.

Those incarcerations are generally short-term and involve crimes like disturbing the peace or vagrancy. But no one argues that jailing the mentally ill is a solution to their housing needs. The situation persists, say some advocates, because of the stigma still attached to diseases of the mind.

"Mental illness is an equal opportunity illness - it strikes across all barriers of race and class. Yet the public perception is still the disheveled person on the street, " says Michael Allen, senior staff attorney at the Judge David L. Bazelon Center for Mental Health Law in Washington, D.C.

Today's reality falls far short of the vision of four decades ago, when the deinstitutionalization movement was born. In theory, people were to move from mental hospitals into community mental health care systems, and be reintegrated into towns and neighborhoods where they'd get services and shelter. Several studies have shown the idea can work, and thousands of Americans with mental illness have benefited - but thousands more have failed to get adequate follow-up, treatment and assistance.

One model that shows promise is so-called "supportive public housing." Residents have the same rights as any other tenant, with freedom to come and go as they please, and the housing complex links them to social services including mental health care. Advocates believe all but the most severely mentally ill can succeed in such a setting.

The supportive housing model also saves taxpayers money, experts say. Researchers at Berkeley University's Goldman School of Public Policy examined the consequences of providing supportive housing for 250 people with mental illness. Before moving in, the participants had made frequent use of emergency rooms and hospitals, costing thousands of dollars per person annually. Once the people were placed in supportive housing, the study found a 58 percent decrease in emergency room visits, a corresponding drop in hospital stays, and virtual elimination of their use of residential mental health facilities.

But supportive housing is still lamentably scarce, advocates say. People with mental illness continue to suffer from the general shortage of affordable housing, compounded by some landlords' unwillingness to rent to the mentally ill. "What we call in-your-face discrimination still exists, " Sperling says, "even though it's against the law." And in some cases, the law itself limits housing options: Federal legislation that allows public housing to be designated "elderly only" has closed off up to 300, 000 housing units to the mentally ill, Allen estimates.

Approximately one-third of the nation's homeless have a severe mental illness. Many others with mental illness end up living nomadically, moving among the homes of parents and other family members. Outside the family, group homes are the primary housing option for people with mental illness, but they often face stiff resistance from neighbors: "There are huge NIMBY (not-in-my-backyard) battles about establishing a four-person home for people with depression, " says Allen.

These battles contribute to the persistence of larger facilities in some states, now usually privately-run but still paid for by taxpayers. They go by different names in different states. In New York state they're called "adult care homes."

In Spring 2002, the New York Times detailed appalling conditions in the adult care homes that house hundreds of the mentally ill in New York City. The articles revealed a level of neglect and abuse that echoed the horror stories about state mental hospitals in the 1950s and '60s. Advocates say it's an old problem in a new guise, and one likely to persist as long as prejudices about mental illness survive.

"If I had to describe the public attitude toward people with mental illness, " says Allen, "it would be 'Out of sight, out of mind.'"

About five percent of American adults have a severe mental illness, according to the Center for Mental Health Services, part of the U.S. Department of Health and Human Services. A severe mental illness is defined as a disorder that causes substantial interference with the ability to handle basic living skills - such as eating, bathing or managing money - or to function in family, job or social contexts.

In the popular perception, mental illness still is often regarded as a mysterious, untreatable disease. In fact, say experts, a majority of people with mental illness can be successfully treated. Most treatment today involves medication, sometimes combined with "talking therapy" or other methods. The National Alliance for Mental Illness says that the rate of success for treating a first episode of bipolar disorder is 80 percent; for major depression, 70 percent; and for schizophrenia, 60 percent.

Still, mental illness is a major health problem. Slightly more than one-fourth of the 1, 000, 000 hospital admissions in the United States in 1998 were for psychiatric care, according to the Center for Mental Health Services. Another study estimated the cost of mental illness in the United States at $148 billion in 1990, both in health services and indirect costs such as lost time at work. And the burden on the health care system is exacerbated by the inadequate housing options for the mentally ill once they leave health care settings.