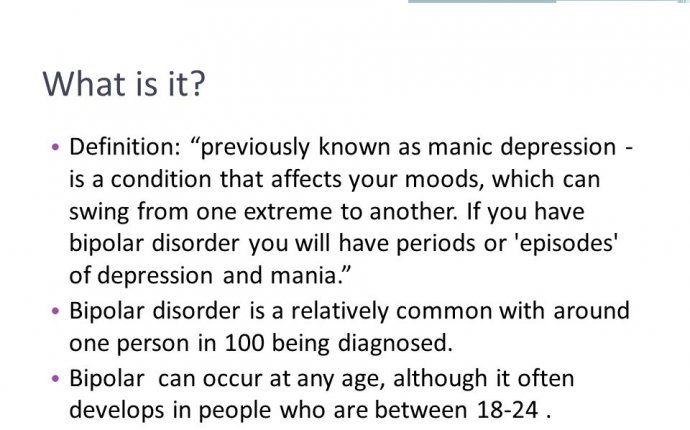 Bipolar Disorder What is it

Bipolar disorder, also known as manic-depressive illness, is a brain disorder that causes unusual shifts in mood, energy, activity levels, and the ability to carry out day-to-day tasks.

There are four basic types of bipolar disorder; all of them involve clear changes in mood, energy, and activity levels. These moods range from periods of extremely “up, ” elated, and energized behavior (known as manic episodes) to very sad, “down, ” or hopeless periods (known as depressive episodes). Less severe manic periods are known as hypomanic episodes.

People with bipolar disorder experience periods of unusually intense emotion, changes in sleep patterns and activity levels, and unusual behaviors. These distinct periods are called “mood episodes.” Mood episodes are drastically different from the moods and behaviors that are typical for the person. Extreme changes in energy, activity, and sleep go along with mood episodes.

@Twinkle: It should never be a subject for a showing-off-joke bc you don't know what a person, who has a bipolar disorder, is going through.

@Jaclynhill It doesn't sound like they even know what bipolar disorder is tbh...it's not ups and downs through the day like many think