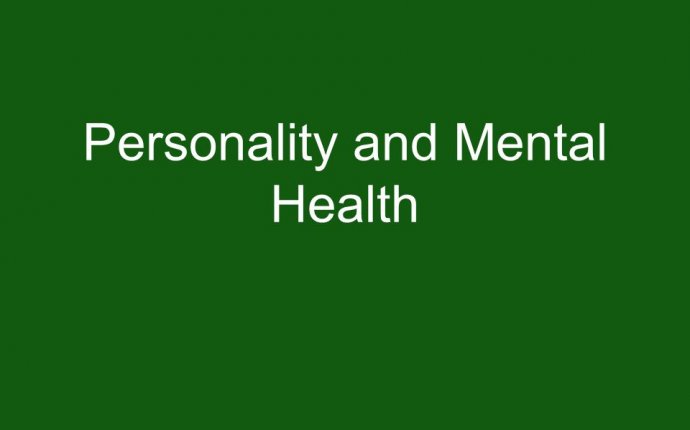 One of the cruel things about mental illness is how randomly it can strike. There’s often no rhyme or reason to it: Some people endure almost unfathomable trauma but are subsequently quite “normal” in their day-to-day functioning, while other people develop crippling mental-health issues despite a lack of known risk factors.

An obvious question that has interested mental-health researchers for a long time is how people’s personalities affect their likelihood of developing mental illness. Intuitively, one might think that someone high in neuroticism, for example, might be more susceptible to anxiety-related disorders than someone low in that trait. And those who are high in extraversion might enjoy certain protections, given the likelihood they have more expansive social networks, which might help them cope with certain difficulties.

Overall, though, there’s a lack of hard evidence on this question, which is part of why the new issue of JAMA Psychiatry is quite interesting. In an editorial, Richard P. Bentall, a psychology researcher at the University of Liverpool, runs down noteworthy new research appearing in the same issue on the potential connections between people’s personality traits and their susceptibility to certain types of mental illness. As Bentall explains, a team led by Joseph F. Hayes of University College London “linked Swedish military and health records to study the association between the personality characteristics of approximately 1 million men, assessed at 18 to 19 years of age and later inpatient treatment for serious mental illness.”

The researchers found that “the later onset of bipolar disorder was associated with low and high levels of social maturity (a pattern that had been previously reported for the composite leadership assessment) and with low ratings for emotional stability. High levels of emotional stability were protective against schizoaffective disorder, whereas low ratings were associated with an increased risk. In the case of schizophrenia and other nonaffective psychosis outcomes, high levels of social maturity, mental energy, and emotional stability were independently protective, whereas low scores on all of these ratings were risk factors.” These correlations all held even when a bunch of other stuff was controlled for.

As always, there are some limitations to keep in mind here. Perhaps most importantly, it’s difficult to extrapolate from an all-male sample to the general population, Swedish or otherwise — though that might be risky to do here, anyway, since Swedes who enlist in military service could differ from the rest of the population in meaningful ways. Also, “[a]s acknowledged by the authors … the personality measures, although reliable, were specifically designed for the purposes of the Swedish military and did not correspond to recognized personality models” like the Big 5.

Still, though: These are interesting findings extracted from a massive data set. And they get even more interesting when you consider, as Bentall does, the long-term trajectory of research probing the complicated relationship between adverse experiences, personality traits, and mental-health outcomes:

[P]ersonality is unlikely to influence the developmental trajectories that lead to mental ill health in isolation. In recent years, substantial evidence has accumulated that adverse experiences in childhood (eg, physical or sexual abuse, bullying by peers, or early separation from parents) are strong risk factors for psychosis in adulthood.10 Although most of this research has focused on schizophrenia outcomes, the relatively sparse evidence suggests that the same risk factors are important in the case of bipolar disorder.11 Evidence suggests that adverse childhood experiences can affect personality development, particularly promoting neuroticism.12 Thus, low emotional stability could possibly be a mediator between adversity and poor mental health outcomes, a finding that is consistent with the increased stress sensitivity seen in patients with psychosis and a trauma history.13 However, additional evidence suggests that some personality traits, such as high levels of extraversion and conscientiousness and low levels of neuroticism, can moderate the effects of adversity, reducing their potency.14 Disentangling these sorts of associations between personality types and environmental influences is likely to be fruitful in terms of identifying illness-relevant psychological mechanisms and their neural substrates.
Source: nymag.com