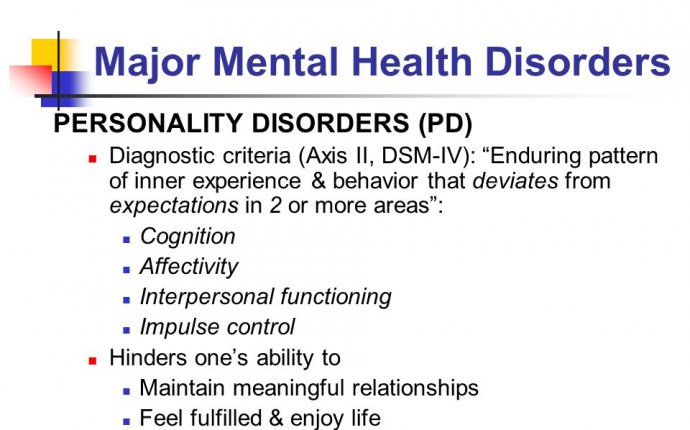 Five major mental disorders share some of the same genetic risk factors, the largest genome-wide study of its kind has found. Evidence for such genetic overlap had previously been limited to pairs of disorders.

National Institutes of Health-funded researchers discovered that people with disorders traditionally thought to be distinct – autism, ADHD, bipolar disorder, major depression and schizophrenia – were more likely to have suspect genetic variation at the same four chromosomal sites. These included risk versions of two genes that regulate the flow of calcium into cells.

“These results will help us move toward diagnostic classification informed by disease cause, ” said Jordan Smoller, M.D. , of Massachusetts General Hospital, Boston, a coordinator of the study, which was supported by NIH’s National Institute of Mental Health. “Although statistically significant, each of these genetic associations individually can account for only a small amount of risk for mental illness, making them insufficient for predictive or diagnostic usefulness by themselves.”

Prior to the study, researchers had turned up evidence of shared genetic risk factors for pairs of disorders, such as schizophenia and bipolar disorder, autism and schizophrenia and depression and bipolar disorder. Such evidence of overlap at the genetic level has blurred the boundaries of traditional diagnostic categories and given rise to research domain criteria, or RDoC, an NIMH initiative to develop new ways of classifying psychopathology for research based on neuroscience and genetics as well as observed behavior.

To learn more, the consortium researchers analyzed the five key disorders as if they were the same illness. They screened for evidence of illness-associated genetic variation across the genomes of 33, 332 patients with all five disorders and 27, 888 controls, drawing on samples from previous consortium mega-analyses.

For the first time, specific variations significantly associated with all five disorders were among several suspect genomic sites that turned up. These included variation in two genes that code for the cellular machinery for regulating the flow of calcium into neurons. Variation in one of these, called CACNA1C, which had previously been implicated in susceptibility to bipolar disorder, schizophrenia and major depression, is known to impact brain circuitry involved in emotion, thinking, attention and memory – functions disrupted in mental illnesses. Variation in another calcium channel gene, called CACNB2, was also linked to the disorders.

Alterations in calcium-channel signaling could represent a fundamental mechanism contributing to a broad vulnerability to psychopathology, suggest the researchers.

They also discovered illness-linked variation for all five disorders in certain regions of chromosomes 3 and 10. Each of these sites spans several genes, and the specific causal factors within them remain elusive. However, one region, called 3p21, which produced the strongest signal of illness association, harbors suspect variations identified in previous genome-wide studies of bipolar disorder and schizophrenia.