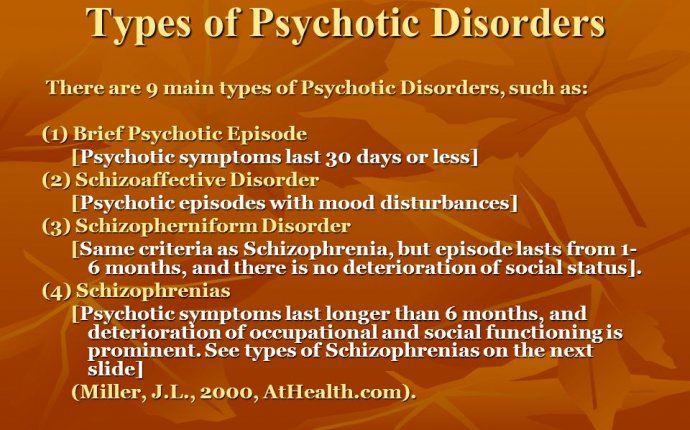 Psychosis is a serious mental disorder characterized by thinking and emotions that are so impaired, that they indicate that the person experiencing them has lost contact with reality.

People who are psychotic have false thoughts (delusions) and/or see or hear things that are not there (hallucinations). These are referred to as “positive” symptoms; “negative” symptoms like loss of motivation and social withdrawal can also occur.

These experiences can be frightening and may cause people who are suffering from psychosis to hurt themselves or others. It is important to see a doctor right away if you or someone you know is experiencing symptoms of psychosis.

Psychosis affects three out of every 100 people. It is most likely to be diagnosed in young adults, but psychosis can happen to anyone.

Recognizing The Signs of Psychosis

A delusion is a false belief or impression that is firmly held even though it is contradicted by reality and what is commonly held as true. There are delusions of paranoia, grandiose delusions, and somatic delusions.

People who are experiencing a delusion of paranoia might think that they are being followed when they are not or that secret messages are being sent only to them through media. Someone with a grandiose delusion will have an exaggerated sense of his or her importance. Somatic delusions are the belief that you have a terminal illness when you are healthy.

A hallucination is a sensory perception in the absence of outside stimulus. That means seeing, hearing, feeling, or smelling something that isn’t present. A person who is hallucinating might see things that don’t exist or hear people talking when he or she is alone.

Delusions and hallucinations seem real to the person who is experiencing them.

Each case of psychosis is different, and the exact cause is not always entirely clear. There are, however, certain illnesses that cause psychosis. There are also triggers like drug use, lack of sleep, and other environmental factors. In addition, certain situations can lead to specific types of psychosis to develop (see “Types of Psychosis” below).

Illnesses that can cause psychosis:

Psychosis can be triggered by the use of alcohol and illegal drugs, including stimulants such as methamphetamine (meth) and cocaine. Hallucinogenic drugs like LSD (acid) often cause users to see things that are not really there, but this effect is temporary. People who do not get enough sleep for long periods of time can experience symptoms of psychosis. Some prescription drugs like steroids and stimulants can cause symptoms of psychosis.

It is not currently possible to precisely identify individuals who are likely to develop a psychotic disorder. However, research has shown that genetics may play a role.

Children born with the genetic mutation known as 22q11 deletion syndrome are at risk for developing a psychotic disorder, especially schizophrenia.

Some kinds of psychosis are brought on by specific conditions or circumstances.

Extreme personal stress like the death of a family member can bring on symptoms of psychosis. Someone experiencing brief reactive psychosis will recover in a few days.

Use of alcohol and drugs can sometimes cause symptoms of psychosis. These symptoms might go away immediately when the effect of the alcohol or drug wears off, but this is not always the case. People who are addicted to alcohol and certain drugs can experience psychotic symptoms if they suddenly stop drinking or taking the drug to which they are addicted.

A head injury or an illness that affects the brain like Parkinson’s disease can cause symptoms of psychosis.

The following types of psychoses are called psychotic disorders. They can be triggered by stress, drug or alcohol use, injury or illness, or they can appear on their own.

A person suffering from delusional disorder strongly believes in things that are not real.

This is major depression with psychotic symptoms.

How is Psychosis Diagnosed

Psychosis is diagnosed through a psychiatric evaluation. That means a doctor will watch the person’s behavior and ask questions about what he or she is experiencing. Medical tests and X-rays may be used to determine whether there is an underlying illness causing the symptoms.

Many of the symptoms of psychosis are perfectly normal in young people. For example, a teenager may suddenly need more sleep in response to changes in their body. Small children often have imaginary friends with whom they talk. If you are worried about psychosis in a child or adolescent, describe the individual’s behavior to a doctor.

Treating psychosis may involve a combination of medications and therapy. Most people recover from psychosis with treatment.

Sometimes people suffering from psychosis can become agitated and be at risk of hurting themselves or others. In those cases, it may be necessary to calm them down quickly. This method is called rapid tranquilization. A doctor or emergency response personnel will administer a fast-acting shot or liquid medicine to relax the patient right away.

RT @enneyehcc: I really wish people were more understanding of eating disorders. Eating disorders are present in all forms and body types.