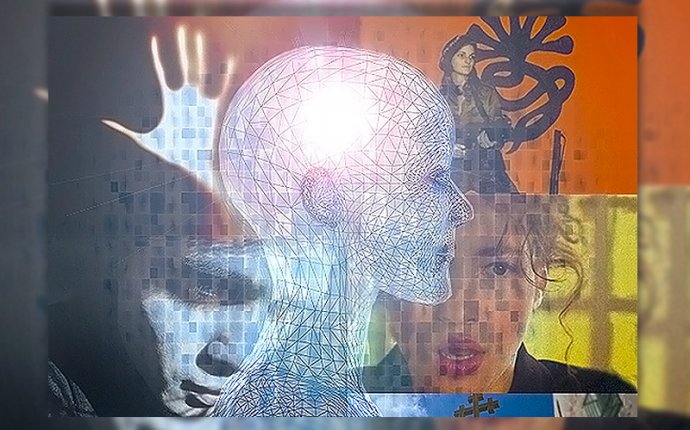 No, this isn’t a disorder for those of us who have woken up feeling “dead tired.” Rather, Cotard’s Syndrome or Walking Corpse Syndrome as it's colloquially known, is a belief held by a person that she is actually dead, or simply doesn’t exist. It has been linked to depression as well as to those who are chronically deprived of sleep or suffer drug psychosis, but is still largely misunderstood by science.

The disorder has also been connected to capgras syndrome, a condition where a person thinks someone in her life has been replaced by an imposter or a duplicate. There is a division in the brain between the visual face recognition area and the part that associates emotional responses with that recognition, Thus, a person suffering from either disorder may not even recognize herself and genuinely convinces herself that she doesn’t exist.

Micropsia, is a visual neurological disease where a patient sees an object much, much smaller than it really is in real life, as if they were looking at the world “through the wrong end of a telescope”. The object perceived seems far away or in some cases extremely close at the same time, for example, a car may seem the size of a cat. The illness is not caused by any deficiency of the eye, but rather how the brain interprets the information received from the eyes. Migraines are said to be an important cause and feature of this disorder, which can also affect a person’s other senses such as hearing and touch. This illness is known to affect children aged between five and 10 and has also been linked to schizophrenia, psychoactive drugs and brain tumors.

While Hannibal Lecter enjoyed eating other people’s flesh, Lesch Nyhaan syndrme is a disorder in which a person exhibits self-mutilating behavior or less commonly the consumption of his own body parts in a rare condition called autosacrophagy. Lesch-Nyhan affects the joints, muscles and brain of the sufferer as a result of the overproduction of uric acid in the body, leading to compulsive lip and finger biting in the majority of cases. Consequently, in 70% of cases, patients have to have their teeth removed to prevent them from biting off their lips, cheeks and tongues. The condition, occurring almost exclusively in boys, has been related to impulse control disorders in general and can range from mild to life threatening.

Sure, we’ve all gone through that narcissistic phase, thinking a person is madly in love us when it just isn’t so, but sufferers of this take infatuation to the next level. Those who suffer from this mental disorder have delusional belief that a person generally from a high social status, like a celebrity, is madly in love with them and making advances toward them through special glances, signals, telepathy or messages through the media. The patient then returns the alleged affection by letters or attempting to visit the unsuspecting recipient. The scary part of this disorder is that the patient’s feeling is so overwhelming that even when the perceived lover directly denies any sentiment of affection or the advances are clearly unwanted, the person remains unconvinced. Thus, the delusion is difficult to break.

Ever identify as a sloth or dog on those lazy summer days where all you want to do is sleep in? Sufferers of the psychopathological phenomenon actually believe they are a literal animal or at least being transformed into one. The condition is often classified as a self-identity disorder subdivided into various types. Boanthropyis the mental condition in which a person believes himself to be a cow or an ox and may very well be seen down on all fours chewing grass.We the disorder can originate in a dream before enveloping the entire awakened mind of the individual.

No, this isn’t something out of a science fiction movie but certainly could be for those living this everyday real-life nightmare. It occurs when a person’s arm appears to move involuntarily or grab hold of things without the cognitive control of the person to whom the arm belongs. It is caused by a conflict between the left and right parts of the brain or mixing of damaged brain wires. Such a condition can often be traumatic for the sufferer who is terrified that her rogue arm might start exhibiting inappropriate behavior in public, like groping others or manipulating objects or tools giving a “feeling that one limb is foreign” or has a will of its own.

“She loves me, she loves me not, she loves me, she loves me not, ” could certainly be the mantra of those who suffer from this generally unknown mental disorder characterized by crippling indecision, or as psychiatrists term it, Paralysis of will” Sufferers of aboulomania appear generally physically and mentally normal in all aspects of life. Yet, when faced with simple life choices like going for a walk or choosing a box of cereal, they run into major psychological problems to the point that they experience anxiety and difficulty regaining normal function. Many sufferers say their incapacity or chronic indecision originates from the need for 100% certainty—hence the sufferer can become paralyzed in the inability to fulfill his own free will when confronted with more than one choice. The condition has also been associated with depressive and obsessive-compulsive disorders.