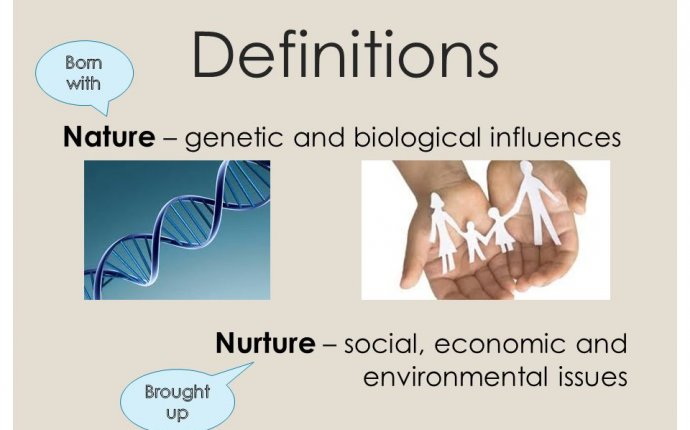 The nature vs nurture debate within psychology is concerned with the extent to which particular aspects of behavior are a product of either inherited (i.e. genetic) or acquired (i.e. learned) characteristics.

Nature is what we think of as pre-wiring and is influenced by genetic inheritance and other biological factors. Nurture is generally taken as the influence of external factors after conception e.g. the product of exposure, experience and learning on an individual.

The nature-nurture debate is concerned with the relative contribution that both influences make to human behavior.

It has long been known that certain physical characteristics are biologically determined by genetic inheritance. Color of eyes, straight or curly hair, pigmentation of the skin and certain diseases (such as Huntingdon’s chorea) are all a function of the genes we inherit. Other physical characteristics, if not determined, appear to be at least strongly influenced by the genetic make-up of our biological parents.

Height, weight, hair loss (in men), life expectancy and vulnerability to specific illnesses (e.g. breast cancer in women) are positively correlated between genetically related individuals. These facts have led many to speculate as to whether psychological characteristics such as behavioral tendencies, personality attributes and mental abilities are also “wired in” before we are even born.

Those who adopt an extreme hereditary position are known as nativists. Their basic assumption is that the characteristics of the human species as a whole are a product of evolution and that individual differences are due to each person’s unique genetic code. In general, the earlier a particular ability appears, the more likely it is to be under the influence of genetic factors.

Characteristics and differences that are not observable at birth, but which emerge later in life, are regarded as the product of maturation. That is to say we all have an inner “biological clock” which switches on (or off) types of behavior in a pre programmed way.

The classic example of the way this affects our physical development are the bodily changes that occur in early adolescence at puberty. However nativists also argue that maturation governs the emergence of attachment in infancy, language acquisition and even cognitive development as a whole.

At the other end of the spectrum are the environmentalists – also known as empiricists (not to be confused with the other empirical / scientific approach). Their basic assumption is that at birth the human mind is a tabula rasa (a blank slate) and that this is gradually “filled” as a result of experience (e.g. behaviorism).

From this point of view psychological characteristics and behavioral differences that emerge through infancy and childhood are the result of learning. It is how you are brought up (nurture) that governs the psychologically significant aspects of child development and the concept of maturation applies only to the biological.

For example, when an infant forms an attachment it is responding to the love and attention it has received, language comes from imitating the speech of others and cognitive development depends on the degree of stimulation in the environment and, more broadly, on the civilization within which the child is reared.

Examples of an extreme nature positions in psychology include Bowlby's (1969) theory of attachment, which views the bond between mother and child as being an innate process that ensures survival. Likewise, Chomsky (1965) proposed language is gained through the use of an innate language acquisition device. Another example of nature is Freud's theory of aggression as being an innate drive (called thanatos).

In contrast Bandura's (1977) social learning theory states that aggression is a learnt from the environment through observation and imitation. This is seen in his famous Bobo doll experiment (Bandura, 1961). Also, Skinner (1957) believed that language is learnt from other people via behavior shaping techniques.

In practice hardly anyone today accepts either of the extreme positions. There are simply too many “facts” on both sides of the argument which are inconsistent with an “all or nothing” view. So instead of asking whether child development is down to nature or nurture the question has been reformulated as “How much?” That is to say, given that heredity and environment both influence the person we become, which is the more important?

This question was first framed by Francis Galton in the late 19th century. Galton (himself a relative of Charles Darwin) was convinced that intellectual ability was largely inherited and that the tendency for “genius” to run in families was the outcome of a natural superiority.

This view has cropped up time and again in the history of psychology and has stimulated much of the research into intelligence testing (particularly on separated twins and adopted children). A modern proponent is the American psychologist Arthur Jenson. Finding that the average I.Q. scores of black Americans were significantly lower than whites he went on to argue that genetic factors were mainly responsible – even going so far as to suggest that intelligence is 80% inherited.

The storm of controversy that developed around Jenson’s claims was not mainly due to logical and empirical weaknesses in his argument. It was more to do with the social and political implications that are often drawn from research that claims to demonstrate natural inequalities between social groups.

Galton himself in 1883 suggested that human society could be improved by “better breeding”. In the 1920’s the American Eugenics Society campaigned for the sterilization of men and women in psychiatric hospitals. Today in Britain many believe that the immigration policies are designed to discriminate against Black and Asian ethnic groups. However the most chilling of all implications drawn from this view of the natural superiority of one race over another took place in the concentration camps of Nazi Germany.

For many environmentalists there is a barely disguised right wing agenda behind the work of the behavioral geneticists. In their view part of the difference in the I.Q. scores of different ethnic groups are due to inbuilt biases in the methods of testing. More fundamentally, they believe that differences in intellectual ability are a product of social inequalities in access to material resources and opportunities. To put it simply children brought up in the ghetto tend to score lower on tests because they are denied the same life chances as more privileged members of society.